Several months ago, The Evil Ex filed for a modification of child support. This resulted in me filling out over twenty pages of supporting documents, proving the expenses I carry for our child (which The EE does not assist with at all) and protesting the modification. The result: I’m losing my child support for my daughter at a time when costs to support her will be increasing. In addition to the expenses of her starting middle school, there will be increased uncovered medical expenses for her since she will need braces and since our deductibles are increasing. The EE is ordered to pay half of all uncovered medical expenses. In the five years since we’ve been divorced, he has not paid a dime.

Of course, when all this started going down, I consulted my attorney. At that time, the idea of losing the income was all very scary. Of course, that was at a time when things were ultra tough for me financially and I was worried about making it even with the child support. I received some good advice, filed my response, and learned that I am losing child support. So, of course, I requested a hearing.

This hearing occurred a couple of weeks ago and was the single greatest source of stress for me this year. It was a phone hearing with no attorneys present. My goal was to prove that out of pocket medical expenses were going to be increasing and that, in light of the fact that The Evil Ex hasn’t and doesn’t pay his half of the uncovered medical expenses, there should be some cash medical support awarded to me for our daughter’s expenses. I’m almost certain this hearing was an exercise in futility. I won’t know for sure until I get the judge’s decision in the mail, but I have a pretty good hunch that I need to begin planning on not planning on that child support.

Sigh. It would have been really nice for that change to have happened next year. That’s just how this year is going for me.

In spite of that very disappointing downturn, there are other things that are improving for me. My bankruptcy discharge has gone through. I am now working on rebuilding my credit. I have one credit card; a small one. I pay it off each month. I refuse to take on debt again. The Hesitant Boyfriend continues in his hesitation to either move things forward or move himself out, but he is now bringing in some steady income and helping to pay for groceries, gas and bills. This definitely helps. I’ve also been able to find additional work, which will help me get caught up on paying the medical bills. I was even able to afford to put my youngest daughter in a basketball camp this week, and buy her the necessary shoes and shorts.

It seems silly to use a basketball camp, shoes and shorts as an indicator of success, but it has been a long, hard, brutal haul since I left The Evil Ex. Being able to provide my youngest with some sort of childhood before she leaves childhood completely means the world to me. I simply haven’t had the resources to do anything like this for her in the last 5 years. Even if I did, her dad would have sabotaged it by not getting her to events if she was with him when they were scheduled. The timing and cost of this camp were perfect for us. In the big scheme of things, when the last few years have been so rough, this was a nice thing to have happened. 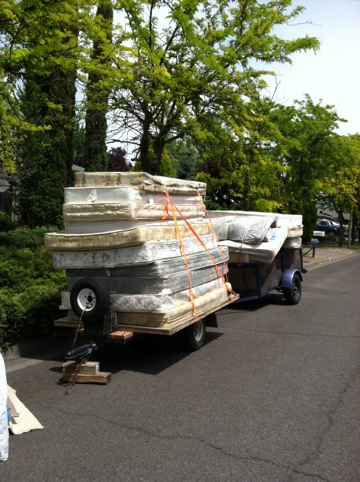 The “rental” is presentable. The mess is up off the floors, bagged, and sits in a pile in the garage until payday when I can order a commercial dumpster for a day. This dumpster will be left in front of the house so we can toss in all the trash bags and broken furniture that remain in 24 hours, at the end of which the garbage company will haul it away for us. At $119, this is a good deal considering I just took a trailer piled high with mattresses and a pickup full of smelly garbage and it cost me $63.

The outside of the home is cleaned up and the rotting stench (or the garbage creating it) has been hauled away. And, yes, during the clean out my worst fears were confirmed when two rat carcasses were discovered in the garage. I’m not surprised that they had rats. The place was the worst cesspool of filth, debris and decay that I have ever seen. This made the mess left by The Evil Ex when he moved out look like Felix Unger’s flat.

The alarming reality is that my tenant had a child living in that mess with her. The little guy was about one; still in diapers and not talking. It just makes me wonder, when we know all that we do about the importance of early experiences on the developing body and brain, what kind of life this child will have. Growing up in filthy, rat infested, smoke filled, dwellings lacking in the requisite attention from his mother who most likely is battling addiction and depression and is unable and ill-equipped to parent. I can empathize with being poor and struggling desperately to make ends meet, but I have a hard time understanding how people when given an opportunity and a place to live that is safe, clean, and in good repair can be so negligent, destructive, and disrespectful.

I don’t want to go off on a big political treatise on the American educational system, but is it any wonder our schools are in trouble when this mentality of disrespect is becoming the mainstream of society filling the seats in our public school classrooms? I just have a hard time understanding how the teachers who deal daily with children who come from circumstances like these are vilified and held responsible for their students’ failures on high stakes tests when the fact that their students are often struggling to survive the night after they leave school. In situations like the one my tenants represent, homework and school achievement seem a bit irrelevant. And, for the record, I live in a small rural area, of which the largest city boasts a population of 60,000. I’m not talking large metropolitan inner city here. This is suburbia. This is the small town. This is not the exception it is becoming the norm. To lay the ills of society and the failure of the educational system to adequately meet the needs of a society it was not designed to service at the feet of teachers and then point blame is misdirected and completely pointless. The failure of our school system is not a teacher problem, it is a societal problem. Poor policy only compounds the problem.

Our society is changing and policy makers, the people who pass the laws telling teachers what they will teach, how they will teach it, and how long each day they will teach it, are completely out of touch with these changes. Further, there seems to be little understanding as to how these pervasive societal changes impact children and classrooms.

It’s a start to get policy makers out of their tidy, manicured offices furnished with items that costs more than it would take to feed a family of five for a year into the classrooms. The problem is that policy makers cannot get any idea of how their policies play out in a five minute walk through. They ought to spend some real time observing how things roll day to day in the life of a classroom over a period of time. They need to see how their policies impact daily instruction and school climate. That would only scratch the surface, but it would be a start at increasing the awareness of policy makers so they could better understand the situation they attempt to improve with their policies.

Of course, if policy makers really wanted to make a difference, they would also familiarize themselves with the things outside the classroom that make learning so difficult for students in the classroom. The mindset shared by my tenants is clearly one absent of the most basic level of respect: for things, the environment, others and themselves. How do you help people who just don’t care? Effecting real, lasting and positive change in a society that often seems dead set on destroying itself, is not and will not be an easy task. It is so much easier to concern oneself with merely getting re-elected.

It’s like my house. 72 hours ago, the place appeared to be in ruin. Some muscle, hard work, and a bit of knowledge and determination, and a whole lot of desire to help later and my house is moving toward being inhabitable again. It could function adequately as a safe dwelling for a family. This is like the policy makers and education today. What we have is okay. In some respects it is even great. But, based on more thorough investigation, there is still a great deal to change.

My house, in order for it to be a good home for a long time, needs far more than a clean out. It needs a complete overhaul. The plumbing needs to be replaced and the kitchen needs updating in the worst way. Windows need to be replaced with energy efficient ones. I’m sure the wiring is out of code. Attic fans and new insulation are necessary. Cabinets, counter tops and floors require updating. The roof will need to be replaced before the homeowners policy expires. Once the improvements begin, it may be discovered that there is further work to be done beneath the surfaces. So it is with our educational system. Once we get started working on educational reform, it will be a large, seemingly impossible task. Where will it end? How much will it cost? Maybe it is better to leave well enough alone?

So, until we figure out which parts of the educational house need to be renovated and which we should dispose of, its just easier to do the basic clean out. Instead, we stick with the basics and make the house look presentable and hope for the best. I think we know it isn’t just the educational system that needs refurbishing. Instead, like it often happens when you remodel, when you rip into one wall, you might uncover a deeper, bigger problem that must be dealt with before the remodel can move forward. That’s where I think we are with education. We’ve begun to remodel, but until we deal with some of the deeper, larger issues buried in the framework of our society, our educational remodel will never be completely effective.

Posted in Life in General