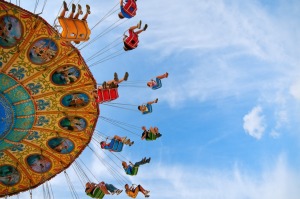 I remember clearly the last time I was on an amusement park ride. It was not a pleasant experience. It was one of those rides that throws you through the air and swings you side to side roughly, abruptly changing directions so suddenly and with such force that you wonder if your internal organs have departed your body. Then you immediately wonder how can the mechanics of this ride sustain such momentum and force.  When will that one bolt work it’s way loose.  When will my chair…or my daughter’s chair in front of me…be the one to go flying wildly into the air as if forcefully flung from the contraption. I remember gritting my teeth, dreading every moment, wondering when the ride would end. My daughter on the other hand reveled in the moment.

It was the last amusement park ride I ever rode.

I learned something about myself that day.  I learned, I don’t really like amusement park rides. Not even the tame ones.  Too much of my psyche is preoccupied with enduring the experience.  There’s no enjoyment.  Even more of my energy is consumed with fretting about that one in one hundred billionth chance that something will go desperately wrong.

Then, of course, there is the time and expense.  At many amusement parks, you pay a premium for a two minute ride. And…you stand in line for a very long time for that short ride.  Even at a small county fair, you can expect to pay way too much for way too little in terms of entertainment time.  And then what?  When it’s all over, you are broke and miserable, with nothing but a bad memory to show for it.  At least, that’s my experience.

No matter how many rides I go on or how many different venues I experience it’s always the same.

It’s interesting how similar my experiences with marriage are to amusement park rides.

Posted on November 26, 2016, in Marriage, What Keeps Me Up At Night and tagged Amusement park rides, divorce, marriage, Miz Insomniac, mizinsomniac, relationships, stress. Bookmark the permalink. Leave a comment.